The rally brought together people from all ages and backgrounds. They had two things in common: they were all freezing, and they were all ready to head to the Hill and press for bold climate action!

The blog post above claims that "more than 300" were there, but I'm skeptical that even that many people bothered to show up.

In the provided photos, the "crowd" looks pretty sparse--I can see what appears to be at least two or three of the same people in both shots: 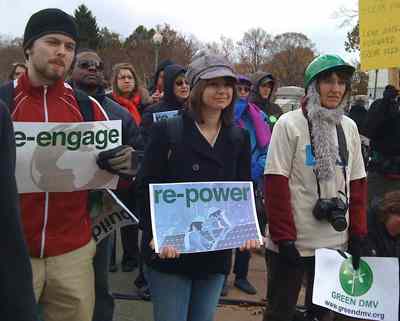 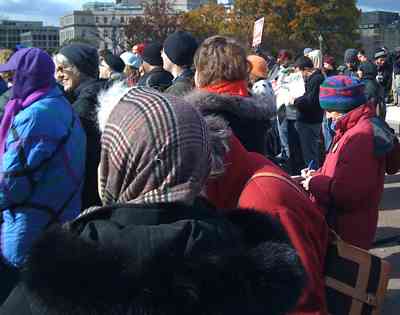 According to Weather Underground, yesterday's DC temperature topped out at 40 degrees, a nice round 40 degrees shy of the 1921 record high.
Posted by Tom at 11:49 AM

As Christopher Hitchens points out, if the photo is taken from a few steps back we can see how many protesters there really are. Therefore the close cropping is a dead give-away about the real numbers.

Who says Americans don't get irony?

The more global warming rallies, speeches and conferences, the more cold days we get.
Remember that the UK Parliament voted through the 'Climate Change Bill' last month. That day, snow settled in London in October for the first time in at least 70 years.

Trivia question for the day. Which word or phrase was most commonly used incorrectly or without any knowledge of it's meaning by these 300 (-250) AGW faithful?