Gore's accuser: "I don't want to be bought off into silence. I only want justice and having this ugly thing come out of the shadows and into the light where it cannot continue any more, and for this man to be stopped from what he has been doing which should have been done a long time ago. I know I'm not the first woman assaulted by him. My guts told me that when I was struggling in the room with him and I stand by it today. I hope the others will be brave enough to come forward in spite of his public stature and army of lawyers. I even wonder who he may have already paid off to shut them up. I believe if someone had spoken up before, this would have not happened to me. And I feel like I must speak up to prevent it if I can, some other woman going through what I went through or worse. He should not get a free pass merely because of his position..."

[With MP3s] Portland police this afternoon released an audiotape of a Portland massage therapist’s statement to police on Jan. 8, 2009, as well as clarifications the therapist made to her statement when she returned on June 3 of this year to get a copy of her report.
...

By January 2009, the therapist returned to Portland police and gave her detailed statement. Portland police did not investigate, citing insufficient evidence without contacting any of her friends, talking to hotel staff or examining clothes she kept from that night. Portland police also did not consult the district attorney’s office and closed the case. The woman came back earlier this month to police, obtained a copy of her statement, and said she was going to take her case to the media.

From the Al Gore investigation transcript, pages 22 and 23 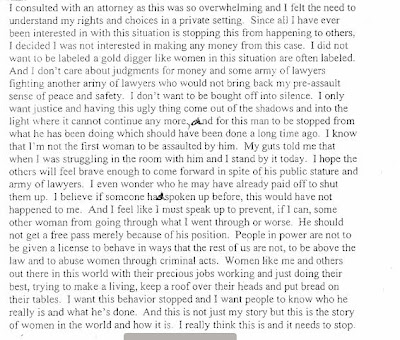 Don't miss this: Listen to her say some of the words above here.
Posted by Tom at 6:22 PM