Polar bear cubs are starving as a result of climate change, according to experts, because global warming is causing the sea ice to melt.
...
New video footage shows a mother bear and two cubs in Hudson Bay, Canada, desperately searching for food.

One of the cubs experiences seizures in the video, and both cubs died within two days of the filming.

Kassie Siegel, director of US research group Center for Biological Diversity, said the bears are dying as a result of climate change.
...
“Although it’s difficult to watch, this video is an important document of the terrible cost of climate change denial and inaction,” she said. “Global warming isn’t a crisis that’s decades away. It’s here now. The sad truth is that polar bears are already starving as global warming melts the Arctic.”
...
The footage was released to coincide with key climate change talks in Cancun, Mexcio. [This video (© 2010 Daniel J. Cox/NaturalExposures.com) was taken as part of The Arctic Documentary Project spearheaded by Daniel J. Cox under the umbrella of Polar Bears International. ]

1. If warming is killing this bear, why is there so much snow around, why is the temperature "well below zero degrees Fahrenheit", and why is the cub described as "shaking and cold"?

2. If the people documenting this situation actually cared about polar bears, and if the bears are really starving, why didn't they try to feed the bears?

3. When another bear shows up, why doesn't that one look like it's starving?

4. The mother and cubs are shown laying around in one spot. How does that qualify as "desperately searching for food"? 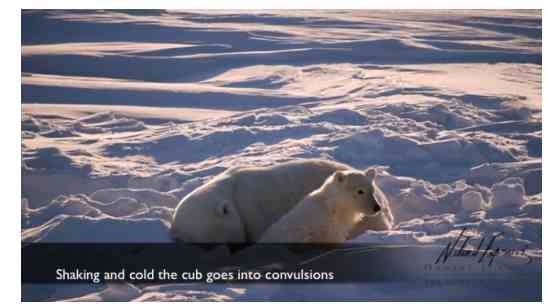 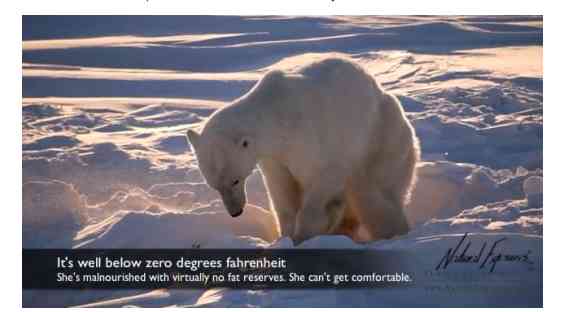 Flashback: Stupid Hudson Bay polar bears: Off the ice since July 15 and still fat, they refuse to cooperate with the warmists

Many of the mostly single, adult males were relatively fat, with "wide rear ends" and a belly "with a dish to it," Hedman said. Cubs were also considered to be doing well, based on how their fat rippled when they ran.

Once again showing images of polar bears are evidence of climate change only, they are definitely not evidence that CO2 is the cause.

Tom, Daniel Cox here. I'm the guy that shot the video of the starving polar bear cubs. I tried posting the answers to your questions on your blog but was not accepted due to the length of the post. Would love to have you take a look at my response by visiting my Blog at http://www.naturalexposures.com/corkboard/?p=943

Hope this finds you well and I appreciate the chance to answer your questions.

@@@Comment@@@I posted this on Mr. Cox's site. I thought your readers might find it interesting. PS another poster talked about buying only local foods which is another myth spread by the green movement.@@@End Comment

Its a money grab to enrich the elite. Biofuel plantations and local farming (shocker!)are destroying the rainforests. Al Gore and the like live in mansions that use as much energy in a month than the average home uses in a year. All the while he will be making some serious dollars (strike that), Chinese Yuans. After all the Guardian states he may be the world’s first carbon billionaire. Iwhale the 100 mile diet is another myth. The main problem is the computer and electronic devices that take massive amounts of energy (carbon) to produce and use. But they never talk about that because alot of their funding is tied to the computer industry. Are there pictures of other starving bears? Has there been an autopsy performed that could help prove your point? The University of Idaho released a study titled “Reduced body size and cub recruitment in polar bears associated with sea ice decline” clearly states; However, of the 19 polar bear
populations recognized throughout the circumpolar
Arctic, data on long-term trends in polar bear condition
and vital rates in response to changing sea ice conditions
are rare and to date have only been evaluated for a
single population in western Hudson Bay (Stirling et al.
1999, Regehr et al. 2007).

So it seems that the data is incomplete.

Link to the Guardian. “How the myth of food miles hurts the planet.” http://www.guardian.co.uk/environment/2008/mar/23/food.ethicalliving

And by keeping my 2000 Ford Explorer I have a lower footprint than the guys driving a Prious according to PBS’s Tom and Ray.

Cheers and safe travels in your photagraphy travels this New Year!!!