Do NOT miss this: Is this what a crowd of 35,000 warmists at "The Largest Climate Rally in History" looks like after most people have gotten cold and left?


[3-hour video that starts around noon?] The Largest Climate Rally in History: February 17, 2013 on the National Mall in Washington, D.C. RSVP today or find more info at ForwardOnClimate.org. Presented by 135 different organizations and their members, including 350.org, the Sierra Club, the Hip Hop Caucus, Greenpeace, the Chesapeake Climate Action Network, Green For All and Forecast the Facts.

Flashback: My prediction for tomorrow's largest global warming rally in history: An embarrassingly large percentage of attendees will get cold and leave early

2/17/13 update:  Ok, so here's what the video above looks like around the 3:13 mark, which would put the time around 3pm, two hours before the rally was supposed to end: 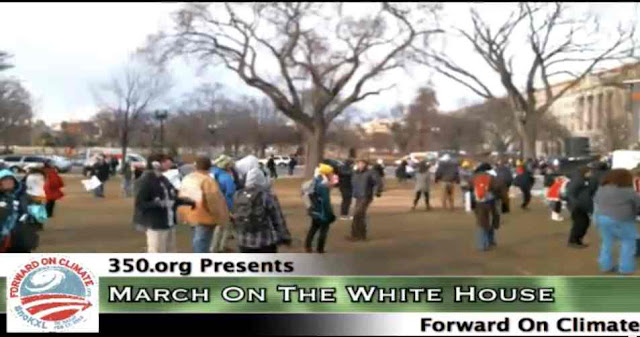 I was actually at the rally. It did last a long time. It started out around noonish I'd say with about 30-35,000 people and steadily grew till maybe around 40-45,000 people. Organizers pegged it at 50,000 after they counted marchers up the street to the White House, but take that for what you want. After returning to original start of the march for dancing and music I'd say there were still about 10, 000 -15,000 there. That's no small feat as it was COLD. It was inspiring and I met a lot of great folks from all walks of life.

The 'organizers' are off by a factor of ten. Which pretty much follows with the 'cause' and frankly your ability to count....45-50000...riiiight.

There is no sadder sight than a young pessimist. - Mark Twain