Schnellnhuber, who is official adviser to German Chancellor Angela Merkel on climate-change issues, said the new findings employed data unavailable to the Intergovernmental Panel on Climate Change (IPCC) for its most recent global warming report.

The two experts said the IPCC report had been based on data up to 2005 only, but since then ice loss in the Arctic had doubled or tripled.

Schnellhuber charged that 20 per cent of the loss of the ice sheet on Greenland could be directly linked to the added carbon dioxide emissions from new Chinese coal-fired power stations. 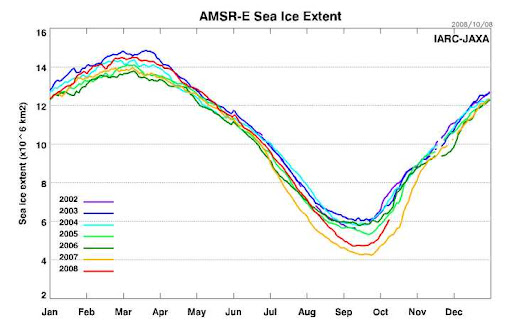 I also noticed that back in the late February through March timeframe, the ice extent was greater than 2004, 5, 6, and 7. Kind of interesting that we never saw any press releases crowing about that.

didn't the British Arctic ice measurement expedition have major problems last year because the weather during the summer was so cold they had to turn back? Something does not compute with all of this data.

Presented with the evidence refuting the CAGW hypothesis... global temps, sea ice levels, sea level rise, severe weather events... one really has to ask now, "Who are the real 'deniers' of science?" The evidence shows that CO2 is not the driver of temperatures that they believe it is.