Note the "to plant" language below: you're encouraged to think that the all-in cost of this garden was $180.

Why don't more people hire crews of workers (overseen by their personal chef) to garden in their backyard?

YouTube - Inside the White House [Video shows a crew of at least five working on the garden, along with a tractor, tiller, and other machinery] 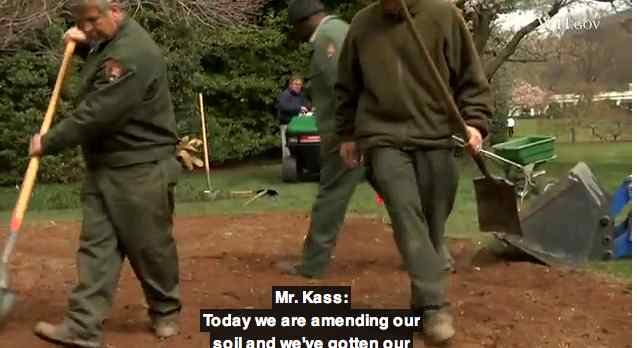 Do these guys work for the National Park Service?

[What's the cost of the White House farmer?]

The White House is looking for a new staff member and one Purdue graduate could fill the position – House Farmer.

The President has always had his own chef, but for the first time the chef wants to focus on locally grown foods; thus the need for a resident farmer. The farmer will transform a five-acre patch of land into an organic garden to grow vegetables for the First Family.
...The top three contestants will be interviewed by Obama, and he will hire one farmer.

[Is the US taxpayer paying this chef to oversee the garden?]

[How many other people "worked toward this goal"? How much did the US taxpayer pay to maintain this garden?]

We are thrilled to announce that The White House Farmer site and many other grassroots efforts across the country have together resulted in Michelle Obama and a group of school children breaking ground for a vegetable garden on the South Lawn on the Vernal Equinox, March 20!

We congratulate everyone who worked toward this goal. Together we have raised awareness of the value of people growing healthy local foods accessible to all.

[What's the total cost of setting up and maintaining the White House Farmer web site?]

Check back as our White House Garden grows, and read an op-ed piece below written by White House Farmer site coordinator Terra Brockman.

The White House also failed to mention the cost of being allowed to call the food "organic".
It takes 3 years and thousands of dollars to be certified organic.

And what about the equipment costs? Rototillers - hundreds and hundreds of dollars - and the seed costs for organic seeds have to be more than $180 for 5 acres.

What a bunch of lies. I grow veggies sporadically, and between the groundhhogs, bunnies, deer and my own chickens, I'm lucky to harvest much of anything at all. LOL!
But then, I don't have 24 hour security keeping an eye on my plot of land.