Just past the two-minute mark, Mann suggests that tar sands use would elevate atmospheric CO2 to "dangerous" levels.

Mann's fake Nobel is referenced twice verbally and once in this graphic; Mann makes no effort to correct the references: 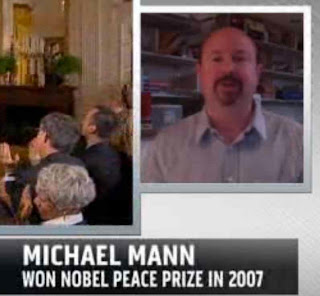 Team Leftie has already worked out the response in the unlikely event Mann is ever challenged by an MSM propagandist on the Nobel Prize - Barack Obama re-gifted his to Mann, you see.

CO2 is a “trace gas” in air, insignificant by definition, 1/7th the absorber of IR, heat
energy from sunlight, as water vapor which has 80 times as many molecules captures 560 times
as much heat making 99.8% of all "global warming." CO2 does only 0.2% of it.

Carbon combustion generates 80% of our energy. Control and taxing of carbon would give the
elected ruling class more power and money than anything since the Magna Carta of 1215 AD.

Come see us at The Two Minute Conservative

Don't forget, he was also Time Magazine's "Person of the Year" for 2006! http://en.wikipedia.org/wiki/You_(Time_Person_of_the_Year)