Can the IPCC brand be damaged any further? Note that IPCC AR5 lead author Roger Jones seems proud of his part in a profane, stupid 2011 climate propaganda video


Here is a transcript of the lyrics:
...I'm a climate scientist..
Droppin facts all over this wax
While bitches be crying about a carbon tax
Climate change is caused by people
...
We gotta move fast or we'll be forsaken,
Cause we were too busy suckin dick Copenhagen: (Politician)
...
We're scientists, what we speak is True.
Unlike Andrew Bolt our work is Peer Reviewed... ooohhh
...
Feedback is like climate change on crack
...
The Green house effect is just a theory sucker (Alan Jones)
Yeah so is gravity float away muther f**cker

IDEA » Making of the awesome “I’m a climate scientist” video


Mr. Ilic emailed a few climate groups in Australia 2 weeks before filming, and a few scientists were interested. Dr. Roger Jones (Victoria University) was the most senior scientist to get involved. Dr. Jones did student comedy in his younger days, and also wanted to support the video project by lending the credibility of a “professor.” He had some other senior colleagues would have also participated, but couldn’t make the video shoot. As Mr. Ilic wrote the first drafts of the lyric, he worked closely with Dr. Jones and Dr. Katrin Meissner (University of New South Wales) who fact checked the lyrics, and provided Mr. Ilic with material to mine for lyrics.
...
Dr. Jones says he is “contemplating more guerrilla-type actions but not sure what works (a repeat wouldn’t).”


Other Coordinating Lead Authors from Australia in Working Group II include:


From my point of view, communicating the science from a respectable, learned position can get pretty boring if it’s the only thing going. This was fun to do. 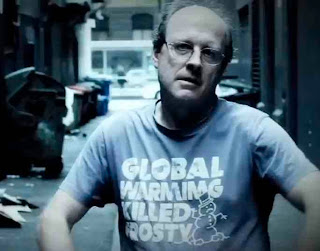