Clueless left-wing English major Chris Mooney thinks that Americans might get all excited about the latest scary federal government global warming propaganda, even though they've yawned at very similar propaganda for decades

Could This Scary Report Get Americans to Care About Climate? | Mother Jones


This new report is perhaps the single best conversation piece he's likely to encounter...What makes the new National Climate Assessment so powerful—and accordingly, so threatening to the climate change deniers—is that it brings the debate down from the atmosphere and puts it, Google Maps-style, right smack in your backyard.
...
The first assessment, released late in the Clinton years and then handed off to the environmentally hostile Bush team, was widely attacked by the denier crowd and was subject to a censorship campaign by administration itself. I told the whole story in my first book, The Republican War on Science...In sum, brace yourself for a lengthy, public, editing process—with plenty of sniping by the climate-denial trolls.
...
The good news is that the process involves scientists traveling around the country [in fossil-fueled vehicles] 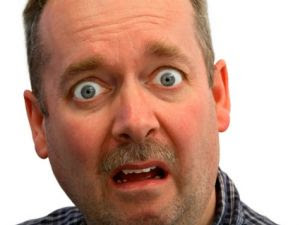 Chris' article is illustrated with the photo above. Left-wingers allegedly make this face when they're told that carbon dioxide may someday raise the lower-48 U.S. average temperature from 55.3 F to 57.3 F.
Posted by Tom at 5:18 AM

you can tell when a commentator doesn't have a belief in their own bullshit by the venue they operate from.
Left of Mao Mother Jones. Never met a government power they didn't like, Huffington Post.
Mouthpeice for the CNN watching, corporate banker, Discover Magazine.

Chris never ever strays from those green pastures where never a discouraging word is uttered about his hoped for future state managed distopia. And if some objective criticism is percieved or even imagined in a feedback comment, it will be quickly eraced.

The man has no balls.