Arctic row fiasco continues: Three weeks in, ice is still blocking their route and on a trip to promote global warming discussion, they're busily removing global warming-related comments from their Facebook page

The Northwest Passage Is Actually The Other Direction | Real Science

There is a theory that Franklin’s expedition went mad from lead solder sealed food cans causing their brains to quit working properly. They were so irrational that they tried dragging the captain’s oak desk back to Canada.

Now the Mainstream crew is dragging a heavy boat southeast away from the northwest passage. Perhaps excess CO2 is affecting their thought process? 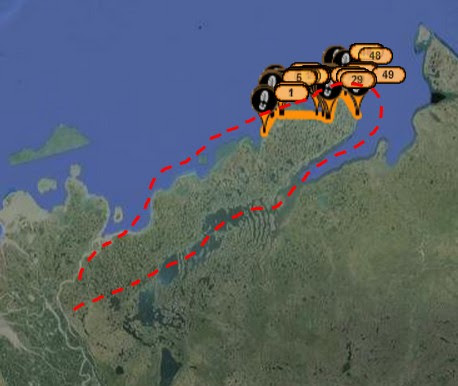 (1) Hey all, Thanks for all of the interaction on... - Mainstream Last First

[July 21, 2013] Hey all, Thanks for all of the interaction on this page. Some of it is positive and great but some of you are using this as a forum to access a larger audience for your own agenda. That's not really what this is for. If you'd like to comment on the job the fellas are doing and the journey they're on, awesome sauce. If you want to get into a heated discussion about global warming, please do so on your own page. I have, and will continue to, remove any disparaging or negative comments. Now, lets get back to the lads! Great job fellas!!

(1) Hey all, Thanks for all of the interaction on... - Mainstream Last First

[comments] Les Johnson This is not a discussion about climate change? When the motto is "Pulling Together For Climate Change"? And one posting was what would you say to a climate skeptic?
Steve Jones You don't like people pointing out that your poor schmucks are just deluded fools? Hope nobody else's lives are put in danger rescuing them from your foolish escapade.
Steve Jones Got an ETA for completion of the project please?
Steve Jones ' I have, and will continue to, remove any disparaging or negative comments.'
Steve Jones You're going to 'Raise Awareness of Climate Change' by banning anybody who isn't convinced? Great strategy guys! How many do you think you'll persuade?

The environment on the North West Passage is very windy and cold with the temperature of arctic waters being just a hair above freezing – survival in them is defined by minutes not hours.

[July 21, 2013] Surely there’s a bigger place at our energy table for renewables. Our strategic corporate partner for this expedition is Mainstream Renewable Power, a company that builds wind and solar farms all over the world. The reason they chose their name is because they want to make renewable energy Mainstream.

I’m not just mentioning this to promote Mainstream as a company, I just think it makes sense to use natural resources as much as possible for our power needs. Given the nature of this expedition, my eyes have been opened up significantly over the past 18 months to how rapidly our climate is changing. Regardless of peoples’ opinions on this topic, hopefully our trip helps to promote more discussion on this very important issue, that not only affects all of us, but will impact future generations probably even more.

" ... If you'd like to comment on the job the fellas are doing and the journey they're on, awesome sauce. ..."

But after days of it being there, they deleted it.

My comment to them was deleted after being posted for 2 or 3 days. Then I was attacked by Jai Mitchell as a fool who was telling lies. I didn't keep a copy of my comment, but paraphrasing it, it said: "I have no doubt if you [ie rowers] are successful you will broadcast the terrible damage AGW is doing to the Arctic. But if you are not successful (as I suspect will be the case) will you likewise trumpet that AGW is not as dire as you predicted?

There will always be a new batch of misguided eco-nuts, eager to jump into situations that are not quite what they thought.