1. Incredibly, the story makes no mention at all of satellite temperature measurements.

More on the non-alarming temperatures measured by satellites is here, here and here. 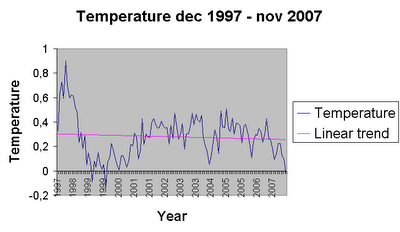 While a 1-degree rise may not seem like much, it represents a major shift in a world where average temperatures over broad regions rarely vary more than a couple hundredths of a degree.

Where, when, and how was the data collected to back up that statement? Can we see this data?

3. At the top of the article, we see a picture of a ringed seal, with a note saying that its habitat is "threatened". Do we have any evidence that ringed seal populations are declining?

An excerpt from this page:

The most numerous subspecies is the Arctic ringed seal, P. h. hispida, found in all Arctic Ocean seas and in the Bering Sea, ranging as far south as Newfoundland and northern Norway. Estimates of the Arctic ringed seal population are difficult due to this species wide distribution, however rough estimates put the population between 2-7 million seals.

Note also that Northern Hemisphere Sea Ice Extent is currently greater than it was last year.
---
Update: Two related posts are now up at Climate Skeptic.