Telling: After Anthony Watts asks Gavin Schmidt if he made the complaint or knows who did, Gavin blocks him

@Twitter @Support is not playing by their own rules in the unfair suspension of climate skeptic Tom Nelson | Watts Up With That? 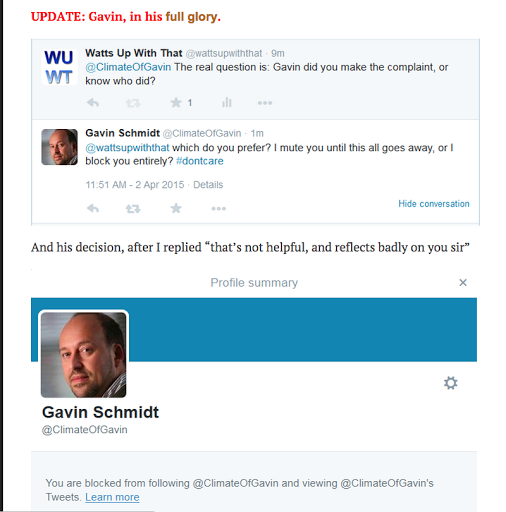 FYI
Yesterday Hubby ran into this:

There is on Twitter this thing called StopRush, and it’s people attacking me and this program much the way Indiana is being attacked today, and whatever conservative institution was attacked yesterday. What this group does is they go after local advertisers on local EIB affiliates, and they try to intimidate local businesses… They just overwhelm them with complaint tweets, threatening tweets, a bunch of e-mails. It’s 10 people. We researched it. We know who the people are. We know where they live. Virtually 85% of all the so-called outrage e-mails and tweets are generated by 10 people, made to look as though they are thousands and thousands and thousands. It’s all fake. It’s all phony.
http://conservativeangle.com/how-radical-leftists-use-psychological-twitter-tricks-to-make-themselves-look-like-the-majority/#the-comments

For what it is worth Tom, you were a perfect Gentleman in all your tweets. This suspension is crap.

If only you were making cakes for homosexual weddings then there would be no question who was right and wrong.
There is no such thing as private property in America.
Twitter has no right to exclude commenters on the basis of their climate orientation.