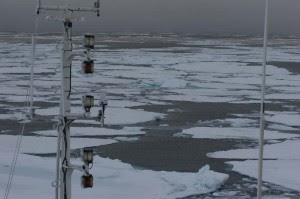 “We’re stuck”
I have slept poorly. The floating ice, while thin, is so prevalent that, throughout the night, it grinds noisily against the side of the boat in a slightly alarming fashion - imagine someone scraping their nails across an old-fashioned blackboard.The then begins earlier than normal and, unusually, I am not woken by Robbie bounding into my room. Instead the ship’s engine roars to life earlier than normal - at around 5.30 - and the MV ‘Havsel’ begins to judder ominously. I clamber out of bed and scramble up to the bridge - all the ship’s crew are there, and they look serious. I look outside and I can see why. The sea is almost entirely congested with ice floes - I would estimate 80% plus of the sea is covered by them. There is a real risk that we could get stuck up here. We have drifted in the night into a much icier area than where we stopped last night. I wake up the team, and everyone groggily makes their way to the bridge. There’s a mixed reaction in the team to the prospect of getting stuck up here.

After awaking to find their vessel frozen in ice the team are steaming around looking for a path that's navigable by kayak.
No paddling today.

(By the way, you may recall that Jeremy Clarkson drove a truck to the North Pole last winter.)

1. From The Reference Frame:

Of course, The Reference Frame wishes them a pleasant weather for the 1,000 km (90% of the trip) remaining to the North Pole, a safe trip back to their homes, and a successful brain transplantation afterwords.

2. Their Google Map has been updated, and now shows them a bit further from the North Pole at 80.496 N.

3. In the comment section at Watts Up With That, Steven Goddard writes:

He never had a chance to get within 500 miles of the North Pole. What a joke.
---
On this date in 1980, the ice edge was in the same place where they are stuck now.

Sept 5 update: They've evidently given up and are said to be headed south. Details here.

Another update: Their support boat was evidently a seal-hunting vessel.
Posted by Tom at 2:36 PM

"Stupid is as stupid does." Forrest Gump

Doh! Still I laughed at that, I am awaiting the double speak from them that will argue that more ice is actually less ice and that we are all doomed!

I don't know anything, but it seems to me that a hurricane is just a giant low pressure system, right? So the Arctic, is a high pressure system and the system wants to balance itself, so it start pulling air our of the arctic to balance the pressure near the tropics where the hurricane is. Of course this air from the arctic is very cold, and as it moves south it heats up and expands, thus balancing the pressure.

Thing is that the pressure in the arctic would be dropping, which would cause a further drop in temperatures because it is losing its heat mass the same way a refrigerator or air conditioning works in your home, or like a pressurized can of air becomes cool in your hand when you spray it.

Now again, I don't know anything. I'm not a trained weather man or an elitist rich kid from the UK, but from my common perspective it seems logical to figure that hurricane season in the Atlantic would be the absolute worst time to go canoeing due North of the Atlantic Ocean, because it seems to a mere layman, such as myself, that the weather should be changing very quickly to something that I would consider brutally cold.

But then again, I do not have all the money in the world, any more than I spend my days drinking ale and cidar in my local pub talking big about the things that I am going to do. I am just a commoner, and really could not care less about making myself into an eco-celebrity.

This entire adventure is like an un-funny eco-snob version of jackass. Once upon a time, I thought that the elite were a little bit brighter than those of us who are just common, but every passing year it seems that the elite go the extra mile to prove that they might even be a litt bit dumber than us common folk. Then again, I'm just common so what do I know?

I could not help being amused that they encountered no less than 88 "rare and endangered" polar bears.