Lots of questions about that "starved" 16-year-old polar bear

If it was healthy in April, can we just assume "from its lying position" that CO2 reduced it to skin and bones by July?  What about the admission that "there may have been some underlying disease"--did anyone actually check?  What did its teeth look like?  How big a factor was old age?  If pregnant female polar bears in Hudson Bay can fast for up to 8 months, how did CO2 cause this particular bear to starve so quickly?

After Ian Stirling found the animal dead in July, how did global warming activist photographer Ashley Cooper end up at the scene?  What was the process of hyping this dead bear to the media?  Didn't thousands of polar bears end up looking like this well before the invention of the internal combustion engine?

Ice loss due to climate change is "absolutely, categorically and without question" the cause of falling polar bear populations, said Richardson, who cares for the UK's only publicly kept polar bears. He said 16 years was not particularly old for a wild male polar bear, which usually live into their early 20s [or 15-18, who's counting?]. "There may have been some underlying disease, but I would be surprised if this was anything other than starvation," he said. "Once polar bears reach adulthood they are normally nigh on indestructible, they are hard as nails."

Ian Stirling, who has studied polar bears for nearly 40 years, told The Guardian newspaper that he found the animal on Svalbard in July.

“From his lying position in death the bear appears to simply have starved and died where he dropped,” Stirling said. “He had no external suggestion of any remaining fat, having been reduced to little more than skin and bone.”

The bear was examined by Norwegian scientists in April about 150 miles south and seemed to be healthy at that time...

Ashley Cooper, the photographer who took the picture, said the sight of the dead polar bear was “desperately sad.”
...
Cooper said the fate of the bear was “what [all] polar bears have got to look forward to over the next 10 to 20 years.”
“There isn’t a future for them unless we can very rapidly get on top of climate change,” he said.
...Ashley Cooper / Global Warming Images
The bear is thought to have been heading north in a desperate search for sea ice that would allow it to hunt for seals. Scientists believe the Arctic could be essentially free of sea ice in September by 2054.  [So why will all polar bears starve within 20 years from now?]

Ashley Cooper has always been passionate about the environment and in recent years Global Warming, the affects of which he has been documenting for the last 8 years. His trips have taken him to many parts of the world with his particular interest being in capturing images that graphically demonstrate the impact of global warming, on people, places and wildlife.

Global Warming Images applauds the efforts of many organizations and businesses promoting climate change solutions and others who are doing excellent work. Below are some of our favorites. 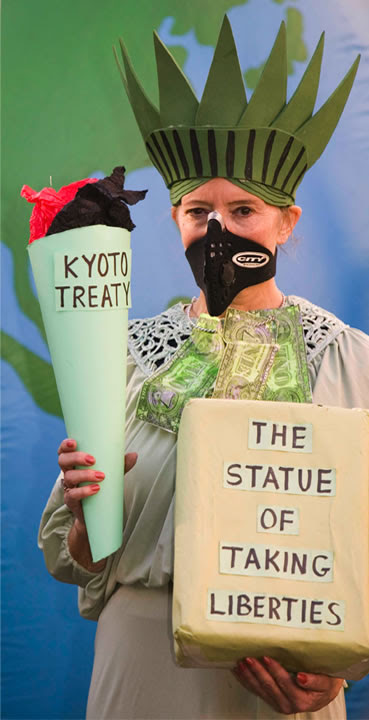 Isn't there more ice than usual this year?

I am Ashley Cooper, the "activist"photographer as you describe me. You also question how I turned up at the scene. It was fairly simple. I paid to be part of an expedition cruise to Svalbard, in the hope of seeing Polar Bears. Whilst there, one of the ships staff spotted the dead bear and we went ashore to investigate. Not as perhaps you might like to believe, that I was somehow jetted in there once a dead bear had been found to put some warmist spin on the tale.
Looking at all the evidence, the most likely conclusion was that the bear had died of starvation after it failed to find any suitable sea ice to hunt on. There are other possibilities also. Most responsible reporting of this story, has pointed this out. No one can say definativley that climate change killed this bear, but as the sea ice around Svalbard shrinks year by year, it is a very likely outcome for a lot of bears.

Ashley - to your comment "Looking at all the evidence, the most likely conclusion was that the bear had died of starvation after it failed to find any suitable sea ice to hunt on. There are other possibilities also. Most responsible reporting of this story, has pointed this out. No one can say definativley that climate change killed this bear, but as the sea ice around Svalbard shrinks year by year, it is a very likely outcome for a lot of bears." This last sentence is total speculation! Couldn't a likely outcome of supposed sea loss be that the bears would just adapt? Where will all the seals go, or do they just vanish with the melting sea ice? Won't the bears just move to where the seals are, or are you suggesting they are too stupid to figure that out? Are polar bears incapable of catching fish out of a stream like most other bears? I realize seals probably provide more sustinence for them than fish, but maybe the polar bears will just get smaller in the future, which would be great because they would emit less CO2!

Here lies one of the big problems with all of this climate change/global warming 'reporting'. No other reporting on this polar bear that I have seen has discussed that climate change is just 1 of the possible causes of this bears death like you suggest. I have probably seen 6 different stories on this, all blaming only climate change, never mentioning it is just one of many possible causes. Besides the fact that a majority of the world is not seeing any real changes in their day to day life, this lousy reporting, alarmism and higly exaggerated and often completely incorrect predictions of what is to come and what has not come even though it was promised, is the reason people are either not buying this anymore or have completely lost interest. If the environmentalists would have approached this topic from more of a pro-conservation angle rather than a 'people suck and we're all going to die and causing the polar bears to die', i think you would have been more effective at making some changes.

I visited your website and looked through some of your photos. You are an activist photographer.

Thanks for taking the time to comment, but your statement that, "No one can say definativley (sic) that climate change killed this bear" is disingenuous and irrelevant to the max.
Google returns 1,920,000 hits on the phrase "climate change killed this polar bear" (with your photo) as of a few seconds ago. Mission accomplished.
Clearly this bear is worth far more to you dead than alive.

I saw the same bear and was one of 50 plus people who took a photograph. It is illegal to touch or disturb the carcase so impossible for law-abiding people to open it up at the scene. However, its teeth and claws looked fine. It had not an ounce of flesh on it and was in a position that suggested it had dropped in its tracks and then tried to push itself forward. It was one of the saddest sights I have ever seen. The fact that this bear could be assessed as in reasonable condition in April and dead two months or so later is of great concern. Walking hundreds of miles across Spitsbergen without food might just do that. On the seals question-- polar bears can't catch seals in the water as they are simply not agile enough. Some seal populations will also suffer as the ice disappears as they pup on it. I can't see any reason why we wouldn't want to do everything we can to protect the environment and leave something worthwhile to future generations. If we wait for absolute proof of global warming before we act it will be too late.

SO, Anonymous responds with: "If we wait for absolute proof of global warming before we act it will be too late."

What about the damage of NOT waiting until there is SUFFICIENT proof--NOT fictitious models that continue to fail to match observations? Supposed scientists have turned a dangerous corner--moving from the realm of study and discovery into that of a political machine. Rather than letting science "speak for itself", scientists are creating the science to fit their political and financial agenda.

A GOOD scientist would have done a thorough autopsy, looked for disease, looked at similarities and disparities, etc. Instead, rather than explaining with the BEST theory--after discounting all other very or highly likely ones--the bias was introduced right from the beginning and looked specifically for "proof" to fit their preconceived notion.